125 - The Haunting of the Elgen Casket Company

This one you will have to use stealth to get it. You are at the back door of the haunted house attraction. You may find a ghoul behind you if your not careful. lol Granted, the building does look even eerier in the middle of a March night while not decked out in all its Halloween lighting and finery. But the first thing I had to ask is why Fitz thought the place was haunted, just because it used to make coffins? Apparently, it is a documented, historical fact that in 1890 a cemetery on the grounds became overcrowded and remains of early settlers were dug up and moved to the new Bluff City Cemetery less than a mile away. Relocating bodies… Doesn’t it always start that way?

The Elgin Metal Casket Company In 1900 construction was completed on a factory building for the Western Thread Company which operated in the space until 1940 when the Elgin Metal Casket Company took over the space. The plant made over 70,000 metal caskets per year – including the caskets of two American presidents (Coolidge and Kennedy) – until its closure in the early 1980s. From what Fitz explains, the building has been the sight of more than a few unsettling occurrences almost from the beginning. For instance, only a month into the thread company’s operation, five mutilated bodies are found in the basement storage area but the crime went unsolved. Ghost activity is regularly reported including sightings of children and women, and it is speculated that the working conditions in the thread factory were questionable. Dubious activities include an unverified tale about a violent foreman who continues to hang around certain areas of the building to this day, waiting for women to come through. The casket company had its own share of misfortune including fatal accidents and one serious cyanide spill 1977, which led to a major fine and the beginning of the end for Elgin Metal Caskets. Not long after the casket factory closed, groups of figures dressed in cloaks were sighted around the now abandoned building and it is later discovered that cult activity was a regular occurrence on the site. Though portions of the factory have had tenants throughout the years, the majority of the building sat empty until Fitz took up a lease in 2009. In the years of his occupancy, Fitz and the Evil Intentions crew realized the more they disturb the site with construction and guests, the more intense the paranormal activity has become.

One of the giant furnaces Employees have seen heavy metal doors inside swing shut on their own and an apparition of a little girl wandering through the rooms. There have been reports of employees having their hair pulled, being shoved, scratched, burned and growled at – all by unseen entities. One room of the haunt, which has ingeniously or otherwise been outfitted as a satanic chapel, is known for more weirdness then the crew can keep track of. According to a local psychic, it is the favorite location of a truly evil entity with a boiling hatred of women in particular – the thread factory foreman perhaps? According to Fitz, every year actors have quit after paranormal encounters in the building. Some have taken off in the middle of a busy night at the haunted house, still wearing their costumes. “There are so many (incidents) — every one of our actors has experienced stuff,” Fitz said. So armed with this background information, I accompany three paranormal investigators and Ryan Kasnick, head of marketing for Evil Intentions and the only one of us able navigate his way through the maze of the factory, into the depths of the building. As vast as the haunt is when it is open to the public, it only accounts for a small percentage of the building’s overall square footage, most of which has no heat, no electricity and is open to the night air via broken windows and crumbling firmament. So Ryan carries a flashlight to keep us from breaking our necks on debris while the rest of us are armed to the teeth with EMF detectors, digital recorders, cameras and one “spirit box” (aka a “white noise” machine). If you aren’t busy watching Ghost Adventures in your free time, then allow me to explain that this is supposedly a way of communicating with spirits by way of ITC (Instrumental trans-communication). Simply put, it is the use of a modified am/fm radio that continuously scans radio stations, and is used to communicate with those on the other side. Our first stop is the basement which encompasses the entire footprint of the main building; meaning the bare, open space spans further into the distance than even Ryan’s industrial flashlight will penetrate – creepy to be sure – and presumably the point closest to any of those bodies that might have missed when the old cemetery was moved. One of the investigators sets up the spirit box while the rest keep close eye on their EMF detectors. I’m clutching the digital voice recorder that I had just used successfully to interview Fitz upstairs for nearly an hour. For some reason (and I am not prepared to speculate as to why) my recorder refused to stay on “record” and instead kept flipping over to “pause.” No matter what I did, including changing out the batteries right then and there, the dang thing wouldn’t keep recording. I eventually bagged it and switched over to the recording feature of my cell phone which functioned perfectly the rest of the evening. The white noise machine and the EMF detectors stubbornly refused to detect anything at all. We then moved to the “furnace room” which took the creep factor to an entirely new level. Remember, this used to be the Elgin Metal Casket Company and all that metal came from somewhere – namely two furnaces large enough to park my car inside. This is the site of several industrial accidents (no OSHA back in the 40’s) and a place where employees have reported being rushed by a shadowy entity. After a nice long stint in the furnace room we decamp without incident to our final investigation site.

Basement orbs Ryan navigates us to that satanic chapel room and invites the two of us girls to take a load off in the pews. The theory here is that the guys will invite the evil foreman to have a go at some new female victims while they try to catch the activity on one of the many devices we’re carrying. Though I will readily admit the atmosphere, added to the overall tension, the pitch dark and the cold, made for a serious adrenalin rush, I am unable to report that I heard, felt or observed anything paranormal. Later as I decompressed (and warmed up) at home with an adult beverage, I strained my ears to several hours of digital recording on my phone, to no avail. The ghosts have shunned me once again. But that doesn’t mean they have never been digitally captured. This picture taken in the basement during another investigation shows what paranormal experts say is dozens of “orbs” (indicators of spirit activity) flying past the investigator’s camera lens. Dust? Maybe, but the basement is the one place that is completely sealed due to flooding, so there is no opportunity for breezes of any kind to blow dust in front of the camera – and that I can vouch for. There has also been success with capturing EVPs on other evenings. Click HERE to listen to a clip from an employee interview when a disembodied male voice can be heard saying “there is no way out of here, this is bullshit!” Last, check out security camera footage from the satanic chapel, captured a few nights after my visit. Remember, this room is part of the haunted attraction and is consequentially monitored along with the other spaces open to the public during the Halloween season. The figures in the room are mannequin props in black, hooded robes.

So there it is – my night of paranormal investigating. For four hours my senses were on high alert, my heart was racing and I felt like I was living a scene from a horror movie. Let’s go down into the basement of the abandoned coffin factory. What could possibly go wrong…? It hardly mattered that the ghosts did not see fit to make an appearance. Want to tag along on a future investigation? Contact the gents via their Facebook page for inquiries, then post a comment or drop a line to sue@blackgate.com. Posted in Goth Chick 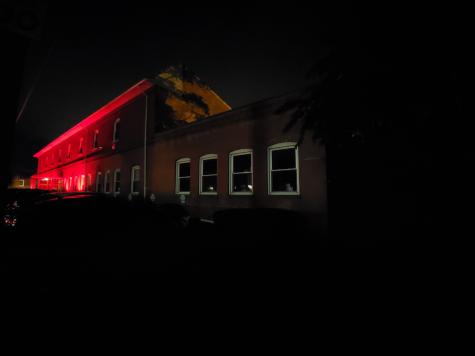 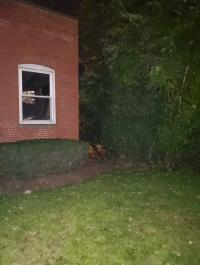 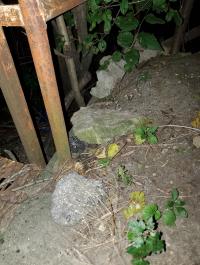 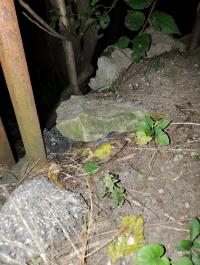