You need to keep moving... but you are exhausted. You escaped the zombie hordes ravaging the metropolitan area east of here and made it to this point. But the hordes are still behind you. Maybe as much as a mile... if you're lucky. You're glad you still have your knife with you (you may need it later) and that you're in a familiar place. Oklahoma's oldest active geocache lies just to the west--you've been here many times. This time, though, something's different. There's a peculiar smell. You know you need to move south. Crossing the Keystone Dam here is the fastest way to do it. Your other options are to try to swim across the rapidly flowing current of the Arkansas River to your east, swim or float across Keystone Lake to your immediate west, or slowly make your way around the interlocking network of lakes and rivers to your far west counter-clockwise by land, the long way around. Running all day has left you spent, almost completely depleted. The dam is the best answer. There's just one problem: what if, once you're on the dam, zombies suddenly approach from the south? You couldn't continue. But then, with the pursuing horde behind you, you also wouldn't be able to turn back north. You'd only have two options--that is, if you wanted to live: You could either hope to survive the jump into the falls raging from the dam down into the river below on your left; or you could leap into the lake waters on your right and chance swimming. But what if you didn't have the strength and energy to swim? What if you sank underwater due to fatigue and got sucked through the dam by the strong eastern current? Then you hear it, the moans of the undead horde still pursuing from the northeast, "Brraaaaiinss!" You need to move now. The decision is made. Time to cross the dam. You quickly begin the crossing south, trying to jog, but it's hard when you're limping. Again you notice the smell... and dead butterflies... and the bodies of birds strewn here and there along the road atop the dam. You scan the areas on either side of the elevated road. To the right, there's a walkway on the dam about 25' below you covered in large driftwood. The water's obviously been high recently. This walkway ends, however, as you reach a small widened area of the road about a quarter of the way across the dam. Then you notice something else on the right, something suspended from the runoff water gutter holes, something a little yellow and light bluish in color. Oh Lord! They're brains! Brains?!
Horrified and overwhelmed with nausea, you cross over to the left side of the road, lean against the guardrail, and try not to vomit. You look at the raging waters below you. Then something else catches your eye, a little further down river. It's a boat, and there are two men on it waving at you frantically. It looks like they're pointing. Behind you? Oh God! You turn back to the north and see the zombie horde that's been pursuing you. And the zombies see you. "BBBRRRRAAAAAAiiiinnsss!" You turn and move quickly south, glancing back down at the men in the boat, when you realize the one on the right isn't pointing behind you. He's frantically pointing ahead of you, to the south. You look up... and your worst nightmare is realized. Zombie hordes have made their way up both sides of the river and are now coming toward you from both the north and the south ends of the dam! "BBRRAAAAAAAAAIIIIINNSSSSS!" Then you remember the brains hanging from the west gutters near the dam's midpoint. Why? Why on earth would someone suspend brains from this dam? A lure? A trap maybe? Now what do you do??? 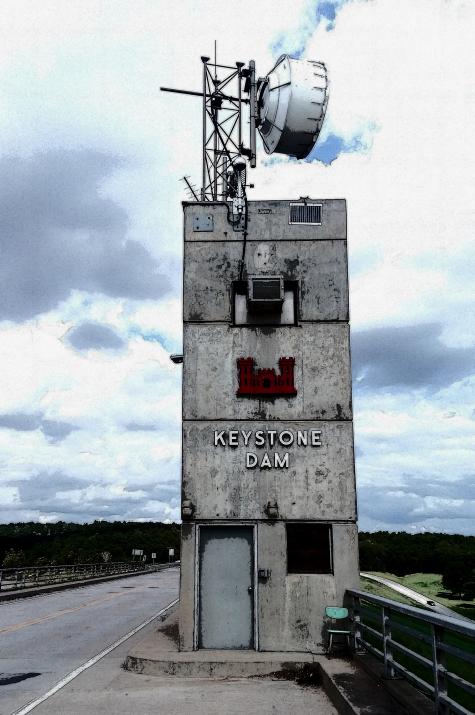 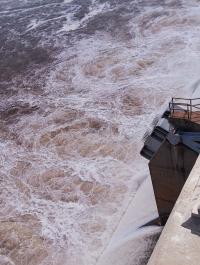 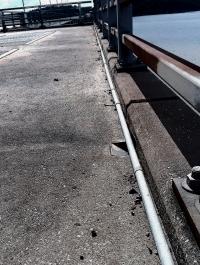